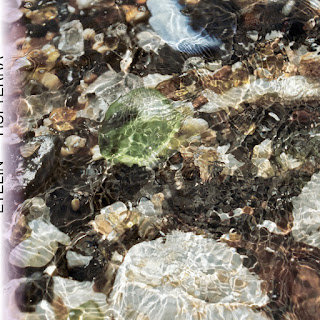 Reaching back into my memory banks, the details are fuzzy as to the first Taiga Remains music that I experienced, and I’m lost as to the first Students of Decay artifact that I acquired.  But it’s safe to say that Alex Cobb’s music and curation have carved out a great deal of my attention and appreciation over the past ten-plus years.  It was probably around the time that I started writing for Foxy Digitalis (RIP) that Cobb’s dronescapes first penetrated my cerebral cortex, the thick tendrils of tone wrapping themselves around my fragile consciousness.  Over time Cobb’s sound has evolved and the Students of Decay catalog has evolved with it.  The format of the releases has matured: from CD-Rs through to cassettes and LPs; the curation has also become more varied stylistically, with artists as diverse as Caroline No, Anne Guthrie, Kyle Bobby Dunn, and Ekin Fil being represented.  Cobb’s sensibilities are finely-tuned toward music that is both intriguing and engaging.

Hui Terra marks a few new beginnings for Cobb.  It’s his debut LP as Etelin, a project that sees his focus veer away from straight drone work.  It’s the first release on his new Soda Gong label, which aims to transcend genre and explore a sense of playfulness and naiveté in modern experimental music.  It was also recorded in the months after Cobb became a new father, in fits and starts as opportunities presented themselves – often at all hours.  Crafted using a pared down setup of digital synths and a sampler, the album sits squarely at the crossroads of musique concrète and effervescent ambience.

“Vixen and Kits” presents Cobb’s new modus operandi in its nearly eight minutes of drawn out bell tones, spatters of ringing chimes, and thunderous rain drop roaring.  The series of sonic vignettes plays like a slide show of percussive elements that veers from the delicate to the outright vigorous.  “Hour Here Hour There” is named after the intermittent snatches of time in which Cobb could record – in between tending to a new infant’s needs – and picks up where its predecessor left off, adding digital filigree and a healthy coating of ambient sound dust.  The processed coos of a newborn baby morph into alien synth tones on “Little Rig” before a melodic pattern appears and gracefully concludes the piece.  Closing track “Been Really Good Today” features subtly warped bells played over a muffled sample of what could be the goings on in Cobb’s domicile in a subtle, perhaps unintentional, nod to folks such as Graham Lambkin or Luc Ferrari.

Hui Terra is not to be missed, both for long-tenured fans of Cobb’s work and for those who appreciate early electronic music and/or modern electroacoustic composition.  Dive headfirst into its dreamlike, cascading narratives by pointing your browser to the Soda Gong Bandcamp.  For a physical manifestation of Cobb’s transcendent imagery, visit Forced Exposure.

Posted by hazycomet at 5:45 PM 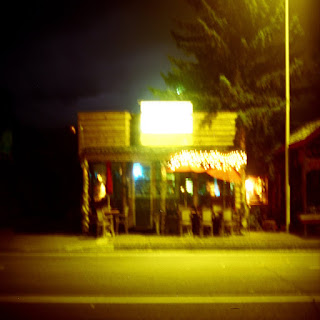 The Atlanta underground is burgeoning, a buried treasure ready to leap out and shout “Surprise!”  Case in point is label Fall Break Records, a label that traffics in “pop, experimental and psychedelic music.”  The imprint’s latest release is a self-titled cassette from Dachsund, the out-jazz duo of Peter Webb (sax, synth) and John Gregg (drums).  These two are part of a wider outsider world, both participating in the post-genre nonet Faun and a Pan Flute (check out the double LP on Feeding Tube, why dontchya?!).  Having been piloting their craft within similar orbits since 2010, Webb and Gregg are tuned into each other as master improvisers are apt to be, and this pair of live sets – imprinted onto a spool of magnetic tape nestled within the confines of a yellow cassette shell – epitomizes this phenomenon.

The A side is ushered in on a synth chord that rises above the din of the audience, around which a languorous saxophone slithers.  Melodies unfurl, timidly at first, until a floor tom gallops into earshot.  At this point, the pair lock horns and begin to telepathically release a collective energy that bobs and weaves, spins and twirls, and flat out leaps around the room.  That such a sparse arrangement can contain such fiery intensity is mystifying.  The set closes as it opened, fading into single synthetic chord.

On the flip, the opening synth passage unfurls melodically, a smoky mist that wafts about with an increasing thickness.  Gregg’s drumming kicks in furiously before Webb picks up his sax and gingerly begins laying down droning notes.  The almost spiritual way that the pair change modes – from extremely vigorous to outright melodic and sweet – is captivating.  It begs mention that both of these sets were recorded direct to iPhone, and this fact is just baffling!  The live-in-the-room essence, the spontaneity and the puissance have been faithfully captured for the universe to enjoy.

Only 30 physical copies of this bomb tape exist, so direct your own energy toward the Fall Break Records Bandcamp and prepare to be shell-shocked!

Posted by hazycomet at 6:28 PM 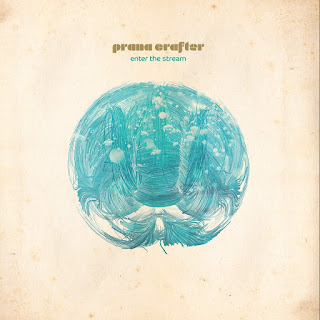 Seattle-based Will Sol is Prana Crafter, a musician and songwriter who straddles the blurry line between psychedelic folk and kosmische drone a la Six Organs of Admittance, and who channels Neil Young & Matt Valentine with his unique vocalizations and six-stringed deftness.  Sol’s been active in the psychedelic sub-underground for a few years now, with efforts for esteemed labels such as Eiderdown, Deep Water Acres and Beyond Beyond is Beyond, but it took three labels to harness the hallucinatory energy of Enter the Stream.  This psychotropic slice of modern folk arrives courtesy of the Cardinal Fuzz, Sunrise OceanBender and Eggs in Aspic imprints.

Sol employs multiple elements to weave his gravity-defying sound worlds.  In addition to a high register croon and multiple layers of fluid guitar, there are synths, singing bowls, field recordings, drums and other percussion threaded into the eight pieces presented here.  Thematically, nature and the spirit are intertwined.  Lush energies are kindled immediately as the eponymous opening track unfurls.

Introduced with a gong hit and book-ended by field recordings of rushing water, a simple strummed guitar and repeated lyric belie the cerebellum-shattering trip that comprises the two succeeding tracks.  “Moon Through Fern Lattice” and “Mycorhizzal Brainstorm” occupy the more trance-inducing edge of the Prana Crafter spectrum.  Thick contrails of juicy synthesizer waft overhead like curlicues of colored smoke as Sol’s guitar writhes melodically.  A miasma of drone prevails until “The Spell” introduces a more grounded sort of reverie.

The Crazy Horse-inspired “Old North Wind” shifts the proceedings homeward with its loping rhythm section and sparsely ornamented arrangement.  It fades into a pair of shamanic drone pieces, which provide a feverish dreamlike drift.  “At the Dawn” closes out the proceedings with an air of melancholia, and the album ends as it began, the rushing water this time fading into echoed whispers of ‘nothing’.

Dream with the mountains in a kingdom outside of time with Prana Crafter; Enter the Stream is available in all three physical formats from the labels involved, and digitally via Bandcamp.

Posted by hazycomet at 6:02 PM