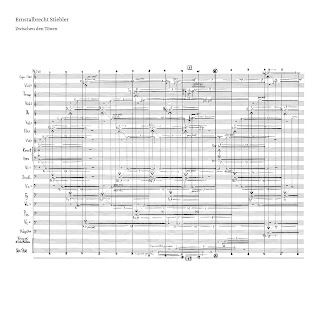 Over here at Nine Chains to the Moon, we’ve yet to dive deeply into the world of modern composition.  What better time than now?  And so we begin...

German composer Ernstalbrecht Stiebler (born in 1934) works with drawn-out tones that slowly evolve and change, in what is referred to as a reductionist style.  His compositions are minimalist, but not in the sense of the American minimalist musical movement.  Stiebler is influenced by minimalism in the visual arts.  As his pieces are assembled with elongated sororities, they pulsate almost organically – they’re living, breathing beings that writhe soothingly.

Zwischen den Tönen is composed of four live recordings spanning from 1997 to 2018.  Each piece comprises a side of vinyl, the first slab containing “Intervall 19” and “Slow Motion”.  The first composition was recorded in 1997 and was performed by the Romanian Radio Chamber Orchestra, conducted by Cristian Brâncuşi.  Amsterdam-based The Barton Workshop performed “Slow Motion”, which was recorded in 2003 at Zaal 100.  Both of these recordings feature multiple instruments moving as one in producing a series of long, drawn-out tones, which are woven intricately into a reverberating mass.  “Slow Motion” appears to be a more intimate affair, as the sounds of the room seep into the space surrounding the music, providing a comforting sense of humanness.

The second LP features the titular piece (translated into English as “between the notes”), which was recorded in 2002 by the choral ensemble Schola Heidelberg.  It is a beautifully wrought recording of intertwining female voices that requires deep listening to fully appreciate.  “Ortung” is the newest of the pieces on offer, having been recorded in February of 2018.  It was performed by the Solistenensemble Kaleidoskop chamber orchestra and features only strings: violin, viola, cello and contrabass.  It is a thick, cloudy mist of extended string tones that is incredibly mesmerizing.

Zwischen den Tönen can be acquired by scouting out your nearest distributor.  In North America, head over to Forced Exposure to get your modern composition fix.

An audio preview of Zwischen den Tönen can be found at this link.  For a sneak peak from Reworks, on which a number of contemporary artists remix Stiebler, see the Bandcamp widget below...

Posted by hazycomet at 6:37 PM 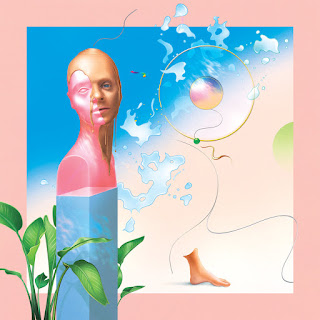 Flipping the coin from the astral voyages of PJS, we find ourselves in the hyperreal digital landscapes crafted by Koeosaeme, aka Japanese sound artist Ryu Yoshizawa.  With Obanikeshi, he has fused bizarre instrumental passages to an ornate miscellany of digital flotsam.  The aural equivalent of a cybernetic Frankenstein with incongruous appendages splayed in multiple directions simultaneously, Koeosaeme’s debut vinyl outing – following a pair of cassettes for the Orange Milk and Angoisse imprints – is rapturous.  It’s an attention-grabbing slab of digitalia that’s not to be missed.

The album starts off with the incredibly brief “Polyhedra”, which doesn’t even begin to set the stage for the entertainment that follows.  Things really get tasty when “Azimuth” appears, and piercing violins are launched toward an unnatural chorus of voices and crumbling detritus.  On “m-face”, a sped-up flute melody surfaces from beneath an ocean of quacking, snapping, and squelching electronics while disembodied speech attempts to pierce the chaos with a hint of humanity.  Each of the tracks – there are thirteen in total on offer – is in itself a pleasurable microcosm of man-machine ecstasy.  All hail our cyborg overlords!

Obanikeshi also arrives via Orange Milk, and the entrancing audio is accompanied by the equally arresting visual art of label co-founder Keith Rankin.  The entire proceedings are mind-bending and worth deep exploration, perfect fodder for the most adventurous musical spelunkers out there – those with an ear for the extraordinary.

Delve deep and obtain your copy of this post-futurist fusion of the human and the digital; prepare to be absorbed into the hive mind.  Your first step is to jack into the Orange Milk Bandcamp – let Koeosaeme take it from there.

Posted by hazycomet at 6:43 PM 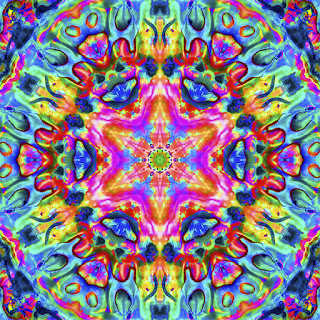 Hey people, are you thirsty for spiritualized dream-drift?  Well the duo of Jordan Christoff and Patrick Dique are here to slake your appetite.  As PJS, the pair offer up relaxing drone poems that spill over the horizon and mingle with cosmic bodies as they unfold toward eternity.  Their music is recorded live in environments suitable for harnessing the energies of our universe, and there are no computers involved at all.  The situations and their outcomes are as peaceful as possible.

PJS are no stranger to these pages, as we spilled a few words about their Hermes cassette last year.  Solstice Birth Magic is equally entrancing, yet its sonic constructs are lengthier and flow with what seem to be more ornate eddies.  They’re sprinkled more liberally with field recordings as well, which adds to the gravitas of the synthesizer drones.

The title track is divided in two, and the first half contains relatively smoother timbres than the latter half, which features buzzier synths and evokes a windswept feeling.  The polish that is characteristic of the introductory piece is only worn away when the field recordings rise in the mix, as a slight hint of static or crackling appears.  As an entity, the entire proceeding shines with a warm, comforting glow.  “Auspicious” encompasses the entire other side of the tape and is slightly more austere than what came before.  A variety of moods is presented across the track’s 26-minute running time: from incredibly dreamy to slightly foreboding to intensely uplifting.  It’s the perfect soundtrack to whatever scenarios are unfolding across your mind’s eye.

Join PJS as they explore both outer and inner space.  Head over to the No Problema Bandcamp and capture some of the exhilarating energy this pair of cosmic voyagers has to offer.

Posted by hazycomet at 6:32 PM

Email ThisBlogThis!Share to TwitterShare to FacebookShare to Pinterest
Labels: No Problema Tapes, PJS 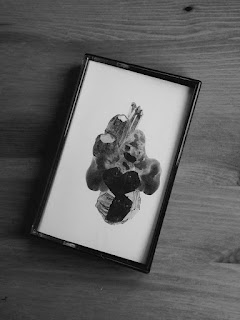 And we’re back… …and this time, we’re diving into the murky waters of minimal/maximal electronics.  Awhile back, we took a listen to that Lafidki tape, which was co-released by the Bezirk and Chinabot imprints.  Well, the Bezirk label is co-run by Tristan Bath (Spools Out) and Daryl Worthington, who slings electrons as Beachers.  Worthington’s no slouch, and he’s got a new tape out, courtesy of the FRM-AT label.  The London-based artist recorded the contents of Language Shapes the View over the course of a week.  During the Winter.  In Latvia.  Just prior to moving back to the UK.  So it goes without saying that there’s a slightly chilly air to the proceedings.

Worthington was inspired by the breakdown of speech and communication.  Words misheard or misunderstood, conversations briefly overheard and unable to be processed.  He has carefully inserted brief and disorienting snippets of modulated voice recordings into his electronic sound matrices.  The alien glossolalia creates the unsettling feeling of being lost in a foreign place, where echoes of unintelligible speech reverberate through the air.

“Sapir Whorf” actually begins – as far as I can discern – speechless, emerging as a complex whirlwind of textured drone.  This track dissolves into “Screaming Into the Echo Chamber”, in which a dubbed out bass pulse is ridden by a ghostly syllable that echoes into infinity.  “Direct the Meaning” features a writhing mass of electronic squiggles, which may or may not actually be sped up and smeared renditions of the warped vocal that closes out the piece.  A lone female repeatedly chants out the title of “What You Did” against a piano throb and an electronic hi-hat, while undulating waves of drone persist beneath.

With “Language Kills the Sentiment”, Worthington pits a deranged vocal against sparse electronic chords and tones, which eventually overtake and devour all empty space.  A lone chord repeatedly plays out to infinity as the piece concludes.  The title track, which closes out the tape, is phenomenal.  A murky dub techno piece, it’s the most resolute of the tunes on offer.  That being said, each of the pieces presented carries its own form of genius, and as a whole Language Shapes the View is a compelling survey of oblique electronic music at its finest.

You’ll want a crack at deciphering Worthington’s oblique lexicon yourself, so head on over to the FRM-AT Bandcamp and make your best attempt.

Posted by hazycomet at 6:22 PM