I Got the Influenza Blues

Sorry folks, but I haven't been feeling up to writing much over the past few days, due to a rampant sickness that has overtaken my house!  I thought I was going to avoid the flu this year, but alas, no luck!

Stay healthy out there, folks! 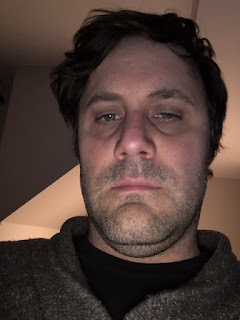 Posted by hazycomet at 5:12 PM No comments: 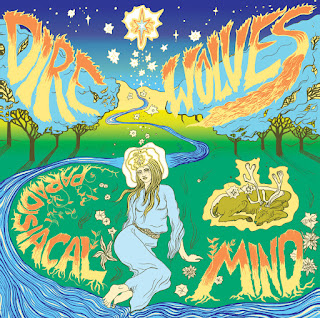 Continuing along the lysergic snail trail that was birthed last week with the Wilder Gonzales Agreda release, here we’ve landed in an American neo-psych boogie spiritualist mode with this new beast from DireWolves – who refer to themselves on this release as Dire Wolves (Just Exactly Perfect Sisters Band).  The roots of this crew stretch way back into the 1990s.  Their subterranean tendrils originate both in the Darla Records sunshine pop-psych-tronica zone – Brian Lucas was a member of the should-be-legendary Mirza – and the equally ancient strange folk ways of The Iditarod, whose Jeffrey Alexander has gone on to play with Black Forest/Black Sea, Jackie-O Motherfucker and these Dire Wolves we’re speaking about.  Their tunes sail within all of these influential orbits as well as the various Kosmische rock and astral jazz landmarks that have woven their way into the contemporary psychedelic streams of thought.  It’s a sonic brew that’ll put you out, in the best way possible!

Paradisiacal Mind is a five-track epic from this San Francisco outfit, hitting all the high notes mentioned previously, and leads off with a flavorful rock-n-roll creeper called “Unfettered and Alive”.  This relatively short jam incorporates delicious stabs of violin and mysterious ghost vocals, which fog up the already misty windows and leave us hungry for what’s next.  “Just Live Your Life Behind Your Eyes” is a hazy vision, one which evades being recognized at the outset, but which eventually achieves clarity over its lengthy running time.  It’s a woven droner that takes off toward the heavens with a maddening energy.

“We Are Stardust” is a stream of proggy jazz that disappears into a cavern of acoustic guitar and bizarre field recordings.  The lysergic energy of 1970s Kosmische out-rock is smeared all over “In and Out of Den Garten He Goes”, which is a swirling, bleary-eyed maelstrom of madness that sets us up for the monumental psych rock blast of the title track.  Coming in at just over seventeen minutes, this piece is the motherlode.  It’s a folding together of all of Dire Wolves’ influences into a single, soaring epic that alone is worth the price of admission.

I highly encourage sourcing out a copy of this maddening slab of free-rock mania.  You can score yourselves the wax over at Cardinal Fuzz in the EU or at Feeding Tube in North America.  However, if your preferred flavor is digital, head on over to Bandcamp to reel in these cosmic sounds.

Posted by hazycomet at 7:17 PM 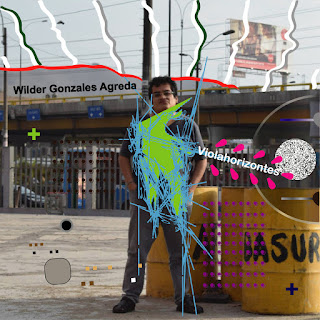 Beams of psychedelic light emanate from the north of Lima, Peru.  These radiant streams are peppered with global ornamentation.  The post-blues wafting of Spacemen 3, the alien electricity of Autechre, the washed-out haze of Enya and the chiaroscuro patterns of The Cure.  The source of this luminosity is a single human: Wilder Gonzales Agreda.  The musician and curator of the Superspace Records imprint has been producing a timeless psychedelia for what seems like forever, nearly in a vacuum outside of his home country.

His latest missive, Violahorizontes is a unique endeavor in that it features only three new tracks, with the other six tunes being remixes courtesy of a host of unique collaborators from around the globe.  Ian Masters of Pale Saints fame appears (as Friendly Scientist), as do Peruvian ex-pat Takeshi Muto, Dutch experimental guitarist Lukas Simonis and New Zealander Sam Hamilton.

With the three originals, Agreda demonstrates his extended tenure in sound production, offering a variety of experimental modes.  “¡Estoy Vivo CSM!” is a Jackson Pollock-esque spattering of synthetic glee, with layers of molten sound gurgling and chirping over a sub-bass thump.  The atmosphere is significantly more relaxed on “Mensajes Tántricos”, with its loping rhythm and thunderstorm samples.  Eventually, garbled messages are beamed in from the stratosphere to spice up the proceedings.  “Surrounded By Social Climbers / Feeling Much Better Alone” is a unique beast of a track, kicking things off with a warm drone which is quickly overrun by a bizarre series of miniaturized explosions.  Disembodied radio transmissions argue with a very bold synth sequence until a collapsing carousel and its broken calliope lead us to an uncertain conclusion.

One would be remiss not to mention the remixes, which offer a variety of takes on Agreda’s signature brand of psychedelia.  There are groovy moments (Takeshi Muto, Friendly Scientist), noisy moments (Lukas Simonis, j̶o̶z̶e̶f̶a̶l̶e̶k̶s̶a̶n̶d̶e̶r̶p̶e̶dr̶o, DJ Miami) and moments of bliss (Sam Hamilton).  Each is worth investigating in its own right, whether you’re up for a head bobbing or a head boggling good time.

Violahorizontes is available in digital format via the Superspace Records Bandcamp, so tune in and prepare to be energized by these effervescent emanations.

Posted by hazycomet at 5:57 PM

Voicehandler - Light From Another Light (Humbler, 2018) 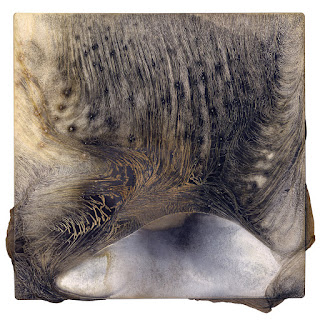 Happy New Year and welcome to 2019!  I hope everyone had a swell conclusion to 2018, with moments of energy, love and light!  For me, I still have a stack of submissions from last year on my docket, so I’ll merrily continue to ingest and investigate them as the new year unfolds…

Light From Another Light is the sophomore full-length effort from Voicehandler, a Bay Area duo comprising vocalist/synthesist Danishta Rivero – half of noisy reggaetón duo Las Sucias – and drummer/percussionist Jacob Felix Heule, who many may recognize from his album with Bill Orcutt called Colonial Donuts.  Together the pair conjure up heavy duty clouds of free-form, catatonia-inducing madness perfect to drive away the winter blues.

The album arrives courtesy of Humbler Records, which I believe is a Heule-directed effort, as all of the label’s releases feature him in some way, shape or form.  It features a trio of extended live recordings from a prolific Spring period likely in the year the disc was released.  The first piece, “June 8”, immediately tears open the space-time continuum with frenetic drumming, gurgling modular synth vapors, and a glossolalia that is at time raw and guttural and at others processed into oblivion.  The spastic ripples emanate a sense of exalted abandon – beatific and bombastic all at once, arresting and entrancing simultaneously.  At the mid-point, Heule’s drumming takes center stage as Rivero’s vocals become shrouded in processing, and then a barely there crackle remains as the piece comes to a close.

“June 1” is a synth-forward exercise, more drone-based than its predecessor.  There is a percussive element present but it’s nearly obfuscated by the buzzy layers of synth.  The drones themselves seem to beat against each other as well, adding another layer of complexity to the proceedings.  Rivero’s voice slips in as a sampled element that is granularized and stretched out to the edges of a non-existent horizon.

“May 25” steps back into the territory mined by “June 8”, but in a more fully-realized form.  The piece is certainly noisy but there are shreds of delightful sanity revealing themselves throughout.  A buzzing drone appears amidst a series of drum rolls that may be meant to introduce an entity that never arrives.  The rolls peter out to reveal a cascade of synth/cymbal washes that vanish into the most introspective passages on display so far.  These final lowercase moments had me stretching my ears in an attempt to catch the subtlest of sonic events.

This gentle-not-gentle silver slab of sound is still available at the source, so direct yourself to the Humbler Bandcamp and prepare to be transported to unknown zones.

Posted by hazycomet at 6:27 PM