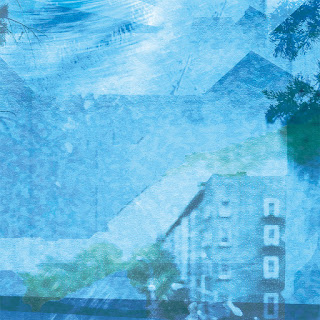 Rhucle is a Tokyo-based musician and artist who began making music under this name five years ago in 2013.  Since then, he’s amassed quite a discography (Discogs lists 53 separate items, to be exact).  He co-runs the relatively young Alien Garage label alongside the Wisconsin-based ambient artist NO DEATH, and the pair also record together as The Rubies.  So to say that Rhucle is no slouch is certainly an understatement; this guy is one hard sonic laborer.

Dude’s also a prolific and talented artist and photographer – his website showcases a vast array of beautiful images to behold.  As his bio dictates, Rhucle “continues to create new works, new ways of expression, and will continue into the future”.  His latest piece of new expression is this gorgeous cassette for the Constellation Tatsu label, his second to be issued by the Oakland-based ambient crew.  On More Beautiful Than Silence, the artist fuses synthesizer drones and field recordings of nature to craft a series of vivaria, each track a tiny microcosm of the world outside of our bustling urban spaces.  Water flows, birds chirp, and synth pads stretch out toward infinity, undulating lackadaisically as if time itself ceases to flow with its usual mechanical precision.

While there are plenty of folks that exist in this sort of modern new age realm of nature-meets-synthetic bliss, Rhucle’s output is particularly beautiful.  Evocative of gorgeous summer days spent outdoors, More Beautiful Than Silence is a healthy respite from the icy cold of winter, a trip to dreamland on clouds of gorgeous drone.

Navigate to the Constellation Tatsu Bandcamp to wind back time and dip your brainstem in Rhucle’s summery shine; while you’re there you might as well grab the entire Fall 2018 batch.  It’s a doozy!

Posted by hazycomet at 7:25 PM 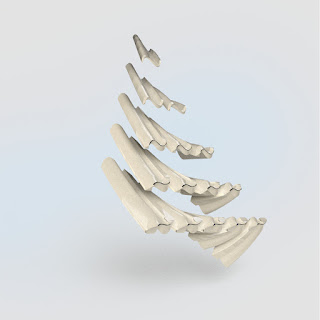 This is the third cassette from the bedroom house/techno duo Energy ☆, and it’s their second eponymous edition.  Comprising ethereal dream weaver Camilla Padgitt-Coles (Ivy Meadows, Future Shuttle) and experimental producer/composer Bryce Hackford, the on-going collaborative project drifts in the liminal spaces that exist outside of genre, place and time.  The music lives in between, the electronic constructions hovering not quite within the bounds of either composition or improvisation.  The beauty of the music subsists in and for itself, with each of the five pieces residing in its own singular microcosm.  Yet a conceptual thread ties the entire cassette together.

Calling this music ‘house’ and/or ‘techno’ is actually slightly misleading, as really only the opening track “~” really exists within such narrow realms with its juicy bass line and hi-hat shuffle.  An arcane ooze infects the oblique rhythm of “~~”, but a pair of sprightly, disjointed melodies dance across its slippery foundation.  The relatively brief “~~~” is an improvisational percussive romp that carries its own uncanny sense of time.

Wrapping all these conceptual notions together is the gorgeous “~~~~”, which sways effortlessly across its 16-minute run time.  Its blissful blanket of drone will surely bring lidded eyes and a lackadaisical smile to those who partake.  Wrapping up the proceedings is “~~~~~” with a brittle rhythm that is the most alien of the bunch.  Delicate chimes and a series of organ drones serve to lighten the mood as the piece drifts toward a peaceful conclusion.

Arriving in an edition of 100 pro-dubbed cassettes, this enigmatic song cycle is certainly worth exploring, so head to the Galtta Media Bandcamp to snap up a copy for yourself. 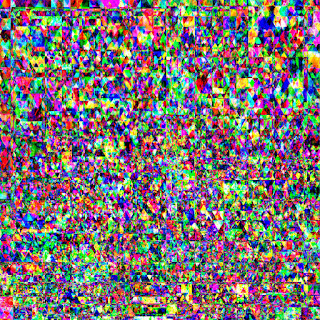 I was first introduced to the music of PJS through another project that Jordan Christoff – half of the duo alongside Patrick Dique – is involved with, Saturn’s Daughter.  In that project, Christoff and Michelle Mostacci sling nature-influenced drone works that are recorded live to tape with no overdubs or computers involved.  With PJS, Christoff and Dique offer more crystalline patterns, with deep shimmering textures that at times stray toward the uncanny.  The pair have been playing together for over twelve years, and this extensive tenure is evinced by how cohesive their music unfolds; its structures are built by seasoned collaborators.

Hermes is the duo’s 2nd official cassette, but it’s their first for the Texas-based Aural Canyon imprint.  Christoff commemorates special dates such as equinoxes and solstices with musical offerings, and as such this tape arrived on All Souls’ Day, the closing of Allhallowtide.  Far from being a haunted affair – which would align with the season – the music that lies herein is flavored by the cosmos.  Along with synths, samplers, field recordings and magic boxes, the liner notes list air, rainbows, melody, water, portals, and texture among the elements used to fabricate the pair’s twilit drones.

Each of the six tracks expresses a unique mood, but the entire song cycle maintains a consistent sense of ebb and flow throughout.  This allows for the lengthier tracks such as “111” and “Ethereal” to travel through various landscapes without straying too far afield from their intended paths.  It also offers room for the duo to experiment with oblique and unnatural tones, such as the ghostly howls at the mid-way point of “Ethereal” or the alien gurgles of “Liquid”.  The sheer immensity of the material itself is reminiscent of some of the more epic moments from New Zealand’s Campbell Kneale and his Birchville Cat Motel project, which I’ve been meaning to dig into my archived boxes of CDs to re-investigate.  PJS have slaked my monolithic drone thirst with this stunning release.

Dive into the ocean of drone by directing your mouse pointer to this link to the Aural Canyon Bandcamp; physical copies are still available.

Posted by hazycomet at 5:51 PM 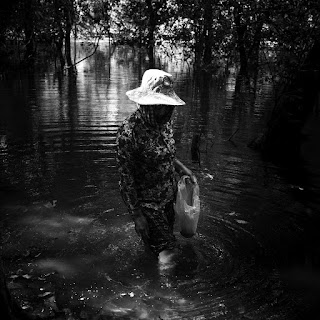 The Chinabot label/collective was founded in 2017 with the release of the Phantom Force compilation, which collected 21 tracks from artists who hail from across the East Asian music scene.  Aimed at rewriting the story surrounding Asian music, the label’s mission statement is to “show a slice of what we like, the cultures we come from and our own ideas”.  Chinabot progenitor Saphy Vong, himself a Cambodian-born artist who has lived in various locations across Asia and Europe but currently resides in London, contributed his own output to the compilation as Lafidki.  His music is situated at both a stylistic and temporal crossroads, in which classic Cambodian pop music, traditional music from his homeland’s highland and mountain peoples, and glitchy electronic rhythms coalesce into a colorful cosmic ambrosia.

Chinabot has co-released the Derichan cassette with the Bezirk imprint, also a relatively young label helmed by UK artists Daryl Worthington (Beachers) and Tristan Bath (Spool’s Out podcast).  The cassette is dedicated to the over twenty ethnic groups that call the Cambodian countryside home.  Derichan translates as “bestial”, and these groups are often derided in their own homeland, often called “ethnic minorities, hill tribes, and other, more dehumanizing terms associated with wildness, primitivity, savagery.”  Vong has woven field recordings made with the help of ethnomusicologist Julien Hairon into his noise-infused electronic sound fields, folding the histories of multiple cultures into a singular clarion call, revealing tragedies that are occurring in present day.

Deforestation, human-influenced drought, and the murder of environmental activists are just some of the themes that Vong touches upon with his transcendental rhythms.  Field recordings bookend the noise-infused rhythms of “The Ceremony of the Drowned,” a paean to a cultural rite threatened by dam construction.  The sinister electronic arpeggios of “Poan Pasda” give way to oblique tones that could be the cries of the banana tree ghost, now homeless (Cambodia currently has one of the highest deforestation rates in the world).  “The Death of Chut Wutty” finds Vong exploring the atrocities of the modern era, ruminating on the murder of the eponymous environmental activist, who was allegedly shot by the Cambodian military.

Only 50 copies of this highly enrapturing cassette are available, so point your browser to either the Chinabot or the Bezirk Bandcamps to score one for yourself.

Posted by hazycomet at 5:37 PM

Email ThisBlogThis!Share to TwitterShare to FacebookShare to Pinterest
Labels: Bezirk, Chinabot, Lafidki
Newer Posts Older Posts Home
Subscribe to: Posts (Atom)
Welcome to Nine Chains to the Moon!
To contact us, please email to ninechainstothemoon [at] gmail [dot] com. Thanks!