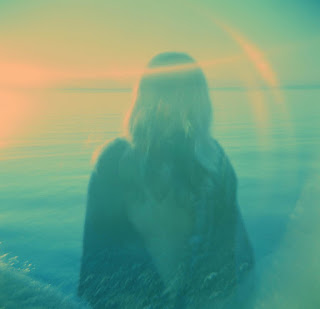 The SPINSTER Sounds label is doing magical things.  We were first introduced to them via the wonderful Quilt of the Universe compilation, and they’ve returned with another mighty undertaking, this time courtesy of Leah Toth who some might know from her work with Wooden Wand.  For this release, Toth is going by the name Amelia Courthouse, and Ruby Glass – as it’s called – is a quiet masterpiece.  The album is awash in delicate melodies that glisten with phosphorescent tracers as they weave about.  Each piece is the product of deft hands.  These hands are composed of fingers and nerve endings that are steeped in their craft.

We take flight alongside Amelia Courthouse beginning with “No Chimbo”.  A softly panned flute-like pad provides a base for a spindly melody to be plucked out overtop.  These elements are joined by a wafting guitar line that just might be the ghostly twin of the opening guitar solo from King Crimson’s “Starless”.  The title track juxtaposes a melancholy piano melody against bells and chimes, of which one seems to become enmeshed with an analog version of itself.  This analog ringing calls out with an uncanny sadness that is melted away by the higher pitched chimes.

“Hugh Kenner” takes its name from a Canadian literary critic (Courthouse is an assistant professor in modern literature) and is decidedly haunting.  Its morose piano line is swept up in a haze of wafting pads and chords that only heighten the sense of foreboding.  “Becker” just might also be named after a literary critic.  Could it be that Courthouse is channeling May Lamberton Becker?  This piece begins rather simply but quickly sprouts multiple adornments that are quite gorgeous.  There’s an unusually compelling distortion effect at play that adds drama to the mellifluous piano melodies.

Listening to the 17-minute-long “Murphie 1” is like trying to take in the entire night sky with one glance.  The delicate pinpoints of starlight, the shooting streaks of meteors, and the slow tracking of satellites coalesce into a fine needlepoint pattern imprinted on our eyelids.  Courthouse’s wordless vocals add an angelic touch to the proceedings.  This is a mighty fine way to close out such an already wonderful release.

It is highly, highly recommended that you obtain a copy of this entrancing release.  There are some left over at the SPINSTER Bandcamp so run over there pronto and seize yourself a copy.

Posted by hazycomet at 6:29 PM

Email ThisBlogThis!Share to TwitterShare to FacebookShare to Pinterest
Labels: Amelia Courthouse, SPINSTER
Newer Posts Older Posts Home
Subscribe to: Posts (Atom)
Welcome to Nine Chains to the Moon!
To contact us, please email to ninechainstothemoon [at] gmail [dot] com. Thanks!