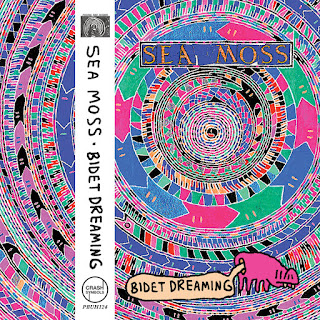 Oh, it’s been too long, people.  Our apologies, but the summer plays tricks with all its sun and heat and fun and such.  But we’re back over here at Nine Chainz HQ, albeit briefly before another adventure looms when we head to Lake Erie to wrestle with water flora and sand and flotsam.  But we’re here now, so let’s dive into this beast of a record by Portland duo Sea Moss.  These cats are wonky in a post-punk meets post-cyborg meets post-noise meets post-shriek meets post-electrons sort of way.  And it’s a delightful wonk that they purvey, a crafty zaniness that is nearly indescribable.

Snazzy drumming reigns supreme, courtesy of skin pounder Zach D’Agostino, who also lays down some ‘tronics.  Noa Ver is they of the Kazu Makino meets Deerhoof meets Caroliner vocals-as-telephony trip and this individual also won’t let us forget that they are wrangling electrons too.  Describing the sound that this pair emanates is particularly difficult, as they defy comparison and stretch beyond genre boundaries.  There are definitely songs here, but they’re wrapped in modem squeals, fuzzy time signatures, ray gun gurgles, and the hypnotically high-pitched voice of Noa Ver.  I smell Lightning Bolt at times, but there’s way more funk involved.  The aforementioned Deerhoof or Caroliner?  Maybe a dollop.

Forget it.  Just sit back and listen up, kiddos.  Bidet Dreaming is where it’s at.  There are no duds here, as all songs are rocketry incarnate, incendiary in execution and energy.  Take “Knock Knock Joke” for example.  It starts off all coy and sparse but ends up coming to a boil in no time – a screaming across the sky, as Thomas Pynchon might put it.  This track is the decoder ring from which all remaining songs can be deciphered – it contains all of Sea Moss’ many moods in one tight package.  And there’s a lot to love: the thunderous drums paired sommelier-style with Noa Ver’s shrill siren call; a DIY electronics aesthetic that takes its time sliding into top gear; a cantankerous rhythm that hangs together precariously.

It’s not enough for us to describe the mayhem of Sea Moss, you must experience it.  So sidle over to either the Crash Symbols Bandcamp or the Feeding Tube Records website and become wrapped in the warped sensibility of this dynamic duo.

Posted by hazycomet at 6:53 PM 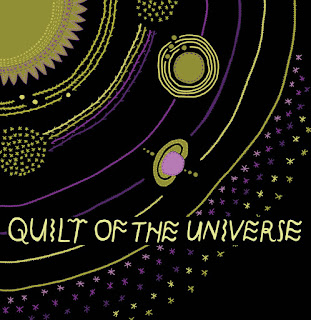 The three proprietors of the SPINSTER imprint began the endeavor in the Winter of 2018 in an effort to support a diverse range of musicians who move in orbits both traditional and radical.  Steeped in music, folklore, and art, the founding mothers of SPINSTER – Sarah Henson, Emily Hilliard, and Sally Anne Morgan – have created something magical: a place for adventurous sounds to call home.

Quilt of the Universe aims to evoke the earthly and the extraterrestrial.  Key touchpoints are NASA’s Voyager Golden Record and a “Solar System Quilt” stitched in rural Iowa by science teacher Ellen Harding Baker in the 1800s.  This juxtaposition of the heavenly and the terrestrial is immediately apparent in the evocative throbs emanating from Baltimore musician Ami Dang’s “Unstruck Sound (Santu Man Pavnai Sukh Baniaa)”.  The singer’s mellifluous vocal stands out amidst a constellation of percussion and clouds of synth.  The multiple layers of Emmalee Hunnicutt’s plucked and bowed cello similarly rise and sway skyward in wafting clouds of tone.  Guitarist Ilyas Ahmed offers a skeletal acoustic guitar piece that is as nimble as it is inwardly focused.

There are also some raucous and quite experimental tracks featured on Quilt of the Universe.  The spaced-out version of 90s club grinder “Return of the Mack” features vocals that are almost percussive in their rapid-fire delivery, laid down over a wash of synth.  The noisy poetry reading “I Saw God” sounds like it was lifted from Glands of External Secretions’ Reverse Atheism.  The track is supplied by Michelle Dove and Brian Howe, who describe their work as “an electropoetic séance”, which is an apt description for this uncanny piece.  Fitness Womxn’s “Creatures” is a new wave raver, while Slut Pill’s “Catcall” features a Dinosaur Jr.-esque guitar intro and a message that damns (rightfully so) moronic displays of toxic masculinity.

Each of the fifteen tracks on offer is threaded into the overarching theme of Quilt of the Universe, and the intersectional feminist ethos of the SPINSTER label itself.  The cassette is part of a larger in-house crowdfunding campaign by the imprint, with a trio of original t-shirts also on offer with designs by Durham artist Julienne Alexander (Elizabeth Cotten), D.C. illustrator Elizabeth Graeber (Pauline Oliveros), and the Portland-based Ilyas Ahmed (Emahoy Tsegué-Maryam Guèbrou).  Head over to the SPINSTER Bandcamp and snatch up some of their wares.

Posted by hazycomet at 5:21 PM

Email ThisBlogThis!Share to TwitterShare to FacebookShare to Pinterest
Labels: SPINSTER
Newer Posts Older Posts Home
Subscribe to: Posts (Atom)
Welcome to Nine Chains to the Moon!
To contact us, please email to ninechainstothemoon [at] gmail [dot] com. Thanks!