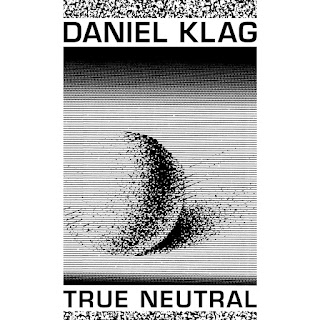 Around here, we’re big fans of Canadian ex-pat Josh Stefane and his Endurance project.  So we were happy when he dropped a line and filled us in about the latest batch of tapes from his Muzan Editions imprint.  There appears to be a common theme across the trio of cassettes, enhanced by the mighty layout skills of one Joe Bastardo.  The stark black-and-white background and snugly-fit text paint a bleak picture, which belies the warm drones that permeate the magnetic tape itself.

Of particular note is True Neutral, the latest from Daniel Klag, who hosts “Dense Liquid”, a bi-weekly radio show hosted by the Brooklyn-based Newtown Radio station.  Klag is new to us, but has released music for labels we love, including Patient Sounds and Constellation Tatsu.  Here, he offers up a pentalogy of tracks that incorporate drones and subtle rhythms in an ever-so-slightly sinister concoction that nevertheless goes down incredibly smoothly.  “Hard Pass” starts things off with a mild shuffling thump over which Klag lays luscious clouds of pseudo-orchestral brilliance.  There is a duel of timbres on “Divine Horsemen”, in which a sawtooth swoon parries the subtle attacks of a synthetic string section.  The effect is rather entrancing, particularly as the two sides commingle near track’s end, when a barely audible pulse appears.

The title track leads off with a repeated snippet of melody that is joined by an ever-evolving tapestry woven of lush drones.  Klag allows this track to set its own direction as the melody drifts away, leaving a rhythmic pattern behind to anchor the tonal soup and provide a sense of locomotion.  With “Mutagen”, he lays down an incredibly emotional drone piece, with a noisy crescendo that will pierce the coldest of hearts with its warmth.  This fundamental limbic-triggering drone wizardry continues into “Ancestor”, which closes out the proceedings.  If you’re not in tears by the time these last two tracks have stormed your hypothalamus, then you must be a sociopath.

To sample these tempestuous drones, all you need to do is visit the Muzan Editions Bandcamp.  Be forewarned: have some tissues at the ready… …you know, in case you get something in your eye… …or whatever.

Posted by hazycomet at 6:07 PM