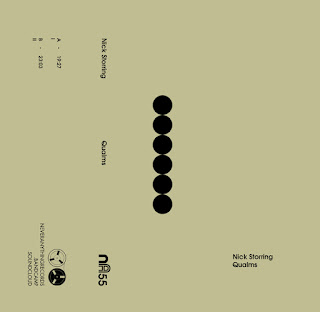 The Toronto-based composer Nick Storring is a favorite around these parts.  He’s active in keeping the Canadian modern exploratory music scene alive and thriving, but his musical interests and activities hover within a great many genres and modes.  Yet his compositional chops and one-man-orchestra instrumental prowess (which we’ve heard dubbed ‘solorchestral’) are truly where he triggers the most pleasurable of pressure points.

Qualms finds Storring continuing to work in the ‘solorchestral’ sphere, in which he composes a work and then plays every instrument involved in the composition.  There have been times in the past – such as on Gardens – where Storring has deployed over sixty distinct instruments in the realization of a work.  With this release, the arsenal is a little more stripped down (you’ve got cello, bass, voice, mandola, violin, guitar, sarangi, piano, percussion, duck/goose calls, and a bunch more) but the atmosphere is tremendously more sinister.  Composed to accompany a choreographic work by Yvonne Ng, the piece – which spans two sides of a cassette – is a slow-burning but heightened exercise in building tension.

The moodiness of the piece works incredibly well.  Although on the surface it appears very environmental – almost like a backdrop to a series of emotional vignettes – when one dives into the music, there are many incredibly intricate elements that slowly take shape and burst forth from their surroundings.  Mid-way through the first half of the piece, a veil of violin and cello barely allow what appear to be flutes and plucked strings to dance around melodically, until it all tumbles into a multitude of rubbed sticks and percussive clangs.  Similarly, at the mid-point of the second half, an almost military-style percussion, melodica and kazoo marching band (I’m sure there are dozens more instruments in this part) meanders down a blind alley, only to collide into a brick wall without missing a beat.

There are many evocative moments to be found on Qualms, and it’s the joy-filled task of the listener to unfold the intricate layers and dive right into it.  It’s this act of beckoning for the listener to explore that makes Storring’s music both fun and adventurous.  I urge you to head over to the Never Anything Bandcamp and experience it for yourselves.

Posted by hazycomet at 5:59 PM

Email ThisBlogThis!Share to TwitterShare to FacebookShare to Pinterest
Labels: Never Anything, Nick Storring
Newer Post Older Post Home
Welcome to Nine Chains to the Moon!
To contact us, please email to ninechainstothemoon [at] gmail [dot] com. Thanks!